The Prkruti device is a solar powered, IOT enabled robust technology which measures all the parameters of pollution. This low cost, easy to maintain device is weather and water proof which is easy to use- you can just plug in the device and it will start monitoring data right away. The device can be easily installed anywhere, whether it is a wall or a pole.

Prkruti monitors air quality real-time- the outdoor device communicates via Wi-Fi and GPRS to a central server which then displays the data on the website. What’s more, the device runs on solar power, so it can work independently. 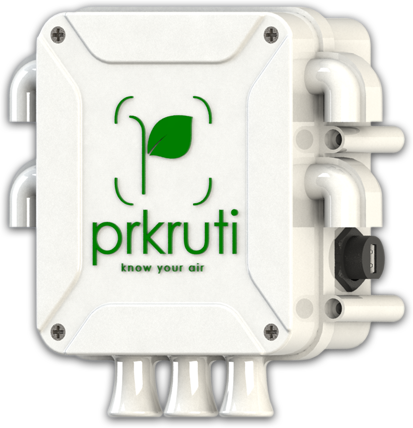 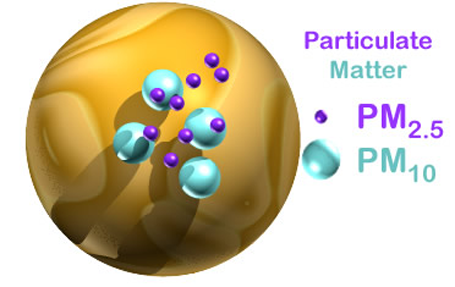 Brief Introduction- Particulate pollution or Particulate matter are tiny solid or liquid particles that are suspended in the air. These PM2.5 particles are 30 times smaller than the diameter of human hair.

Health Effects- The Small particles can get into the bloodstream and can affect both the lungs and the heart. It can cause
the following symptoms 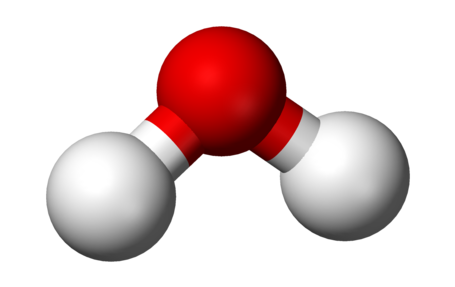 What is it? - Carbon Dioxide is a colourless and odourless gas which is 50% denser than dry air. It is considered both a greenhouse gas as well as a gas which is needed for industrial uses.

Sources of Emission- Carbon Dioxide(CO2) is a gas which is naturally occurring in the atmosphere as a trace gas and which is found in many natural sources like volcanoes, hot springs, geysers, seawater and groundwater. It is produced by all aerobic organisms and is returned to the atmosphere by the lungs of humans and other mammals as well as the gills of fish. It is also produced via fermentation in bread, beer and wine. Burning of wood and other organic materials also release carbon dioxide. 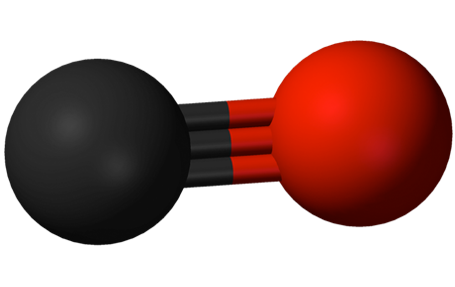 What is it? - Carbon Monoxide is an odourless, colourless and tasteless gas which is slightly denser than air. It is toxic to humans and certain animals, when being exposed to it in certain concentrations.

Sources of Emission- Carbon Monoxide (CO) is formed when there is incomplete combustion from sources like motor engines or stoves. It is also found in Vehicle fuel emissions, open fires and solid waste sites.

Brief Introduction- Carbon Monoxide as a gas was identified by William Cumberland Cruikshank in 1800. It contains a single atom each of carbon and oxygen. Formed due to the partial oxidation of carbon containing compounds, Carbon Monoxide is a highly toxic gas.

Health Effects- Once absorbed by the body, CO binds with hemoglobin to form carboxyhemoglobin, which takes the place of hemoglobin in the body but cannot spread oxygen to the tissues. A 50% level of carboxyhemoglobin can result in seizure, coma or in worst cases, fatality. The most common symptoms of carbon monoxide poisoning include headache, nausea, vomiting, dizziness, fatigue and feelings of weakness.
the following symptoms 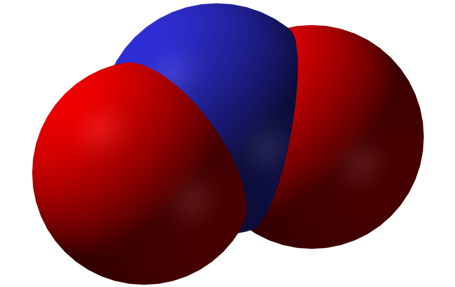 What is it? - Nitrogen Dioxide(NO2) is a gas that forms when nitrogen oxides react with air. It is an intermediate in the industrial synthesis of nitric acid, of which millions of tons are produced every year. NO2 is reddish brown in colour with a pungent, sharp and biting odour.

Sources of Emission- Nitrogen Dioxide is one of the several chemical compounds of nitrogen oxides. It is a reddish brown gas which mainly forms due to the burning of fossil fuels.

Brief Introduction- Nitrogen Dioxide is one of the several chemical compounds of nitrogen oxides. It is a reddish brown gas which mainly forms due to the burning of fossil fuels.

Health Effects- Exposure to NO2 can cause increased airway resistance (decrement in lung function), increased airway responsiveness and broncho-constrictions in healthy individuals. This means that there can be increased cases of asthma, respiratory diseases and symptoms, hospital admissions and visits to emergency rooms.
the following symptoms 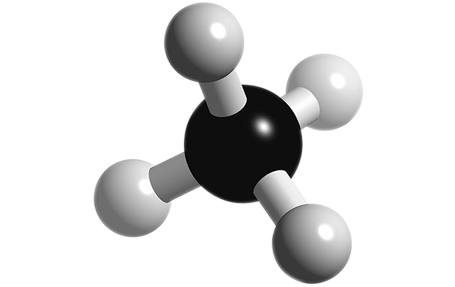 What is it? - It is a naturally occurring hydrocarbon which is used to produce electricity, for cooking besides some industrial uses. It is a colourless and odourless fossil fuel.

Sources of Emission- It is found naturally in the earth with a mixture of other gases; this cocktail of gases is known as natural gas and is considered an important source of energy.

Brief Introduction- Methane is a naturally occurring fossil fuel which is used primarily to generate electricity, use in transportation or for domestic cooking purposes which we use as Compressed Natural Gas (CNG). As methane is odourless and colourless, other gases are added for safety reasons to CNG. Methane can be hazardous especially if it is released into the air, as it can worsen global warming. Care needs to be taken while transporting or handling the gas.

Health Effects- Prolonged exposure to methane can cause people to suffocate, causing you to become unconscious or even die. However, exposure to the gas in small amounts does not have much of an impact on our health.

Protection from Methane- As mentioned earlier, exposure to small amounts of the gas does not prove to be such a health risk. However those employed in the oil and gas sector, agriculture or gas extraction sector need to use adequate protection for handling the gas. 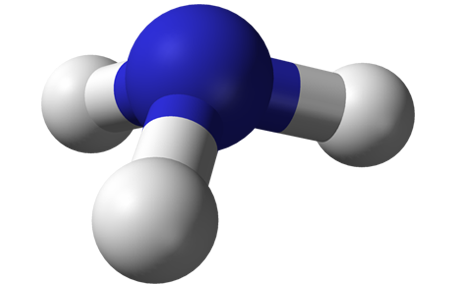 What is it? - Ammonia is a compound of Nitrogen and Hydrogen. It is a colourless gas which has many industrial and domestic uses. If inhaled in large quantities, it can be harmful for humans.

Sources of Emission- Ammonia is a gas that is mass produced for many uses- It is found in nature but in trace quantities. It is also a constituent of tobacco smoke. The danger is when using ammonia based products like home cleaning products or fertilizers.

Brief Introduction- Ammonia (NH3) is a colourless alkaline gas with a sharp smell. It is the simplest stable compound of Nitrogen and Hydrogen. It is commercially produced to make fertilizers, textiles such as nylon and rayon and as a household cleaning agent.

Health Effects- - Ammonia is not much of a health hazard to humans- it is converted to carbamoyl phosphate and excreted through urine by humans and other animals. However, a high exposure to the gas can cause fibrosis which can make breathing difficult.

Protection from Ammonia-
the following symptoms 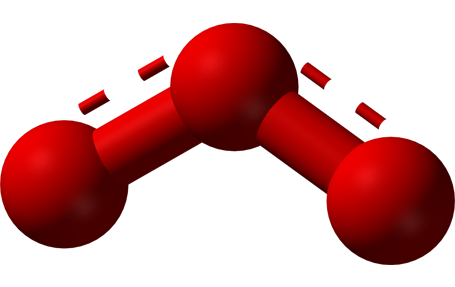 What is it? - It is an allotrope of oxygen, a pale blue gas which is found naturally in the stratosphere of the Earth. Though it is a beneficial gas which helps to block harmful solar radiation, at the ground level, however, it is merely a pollutant.

Sources of Emission- At the ground level, ozone is not directly emitted from any source, instead, it is formed after a chemical reaction between oxides of nitrogen (NOx) and Volatile Organic Compounds (VOCs) in the presence of sunlight. The high levels of earth based ozone typically occur from May to September, between Noon and early evening.

Health Effects- Ozone causes irritation to the respiratory tract and eyes. High level of exposure to ozone can result in coughing, wheezing and chest tightness. People who have heart problems and respiratory diseases have a much higher risk.

Protection from O3
the following symptoms 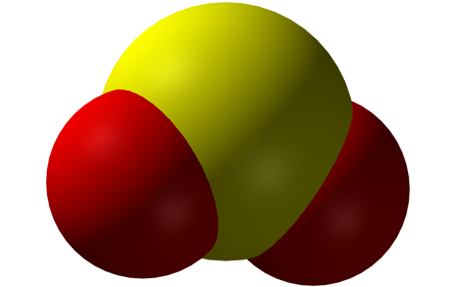 What is it? - It is an unpleasant gas which is emitted into the air due to human sources.

Brief Introduction- - Sulphur dioxide generally occurs in very small concentrations in Earth but is abundant in other planets and moons. It is used as a preservative for fry fruits, wine making and as a refrigerant due to its high condensation and high heat of evaporation.

Health Effects- Short term exposure can cause harm to the respiratory system. The elderly, children and those suffering from asthma can be extremely sensitive to Sulphur Dioxide. When Sulphur Dioxide is released in high concentrations, it disintegrates into sulphur oxides(SOx) which leads to the formation of particulate matter which is another hazard to pollution.

What is it? - Air temperature is the measure of how cold or hot the air is. It is also known as surface temperature in meteorology.Humidity is the amount of water vapour that is present in the air at any given point of time. It can be both in a relative or an absolute measure.

Changes in air temperature- Air temperature changes according to seasonal variations. However, global warming has made air temperature warmer throughout the world, leading to concerns about our future generations.Sources of Humidity(Water vapour)Evaporation of water through natural or manmade sources increases the water vapour in the environment. The evaporation of water vapour can come from various sources- inland water bodies, the sea, from power plants, other industries and from human activities.

Brief Introduction- The air temperature naturally changes with the change in seasons- we have hot summer days and cool winter days. However, the natural process of temperature change can be disrupted or can worsen due to global warming (emissions of CO2 and methane) and other man-made reasons. The increasing temperatures of the oceans and at the poles are a reason for grave concern worldwide. Many international organizations are working with governments to help them reduce their Carbon dioxide and other emissions to reduce the carbon footprint that can damage the environment forever.Source of Air pollutants- Air pollutants can modify or worsen the air temperature during any given time. Air pollutants come from both natural and man made sources-

Effects to the environment- Air pollution primarily causes global warming, where Carbon Dioxide and methane are released into the environment. This results in increased air temperature, causing melting of the freshwater glaciers and icebergs at the poles. This is leading to rising sea levels which is threatening the lives of people living in coastal areas. Preventive measuresWe need to cap the emissions of Carbon Dioxide and other gases in the environment. Governments throughout the world have to work together to reduce their carbon footprint i.e. the amount of CO2 and other gases that are released in the atmosphere. 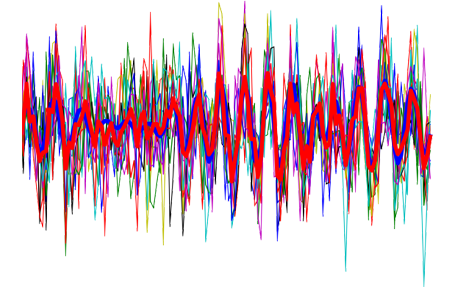 Sources of Emission- Unwanted and unappreciated noise can come from anywhere- a dog barking in the middle of the night, construction activity, traffic noise, aircraft landing and many other sources.

Brief Introduction- We encounter unwanted noises on a daily basis- the incessant honking by some motorists, noisy children, loud music by neighbours, construction activity and many others. When the noise gets too loud or is too frequent in any place then noise pollution becomes a serious problem.

Health Effects- Noise pollution can cause damage to our ear drums to start with and can lead to loss of hearing. It can affect our sleeping patterns and can cause psychological problems like
the following symptoms

These symptoms can lead to severe problems later in life.Loud noise can hamper sleeping patterns and can result in irritation and uncomfortable situations. This can lead to reduced productivity at work. 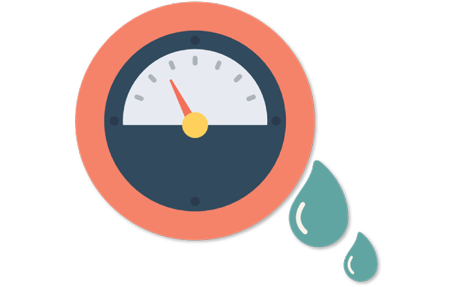 What is it? - Atmospheric pressure or Baromatic pressure is the weight of air molecules pressing down on Earth. The air pressure is more at the sea level and decreases as we move upwards with higher altitudes.

Sources of Emission- NOT APPLICABLE

Health Effects- When we move from a low altitude to a high altitude zone, we might have noticed that our ears ‘pop’, especially when you are travelling by air or train. At high altitudes many people experience ‘altitude sickness’. The symptoms show themselves 6-10 hours after ascent. They include-
the following symptoms

There can also be advanced versions of these symptoms depending upon person to person.

Dealing with Altitude sickness- Whenever you have to go to a place at higher altitudes, you should spend a few days there to get accustomed to the changed air pressure. Do not exert yourself as soon as you reach as this will worsen altitude sickness symptoms.

Prkruti is an open source platform, where you can track real time data from various sources. The Website and application have been developed in synergy, with an elegant GUI interface and design.